Take time to be quiet,

Take time to walk in nature.

Take time to be with your loved ones,

Take time to be kind….

My neighbor died the other day. She was very brave thru out her 5 years with stage 4 Ovarian cancer.  In January her blood transfusions weren’t working any longer so she knew it was time.  She did have hospice come in and I’m sure they were a big help to her husband. Leslye was only 67. She had been an avid horsewoman, a health food nut, hiker, and probably a lot more things than I know. In fact, we weren’t really close but we had known them(her and her husband) since the 70’s and when we moved here 23 years ago they became our neighbors.  It’s been somewhat depressing even though I am philosophical about it, none the less the reality of her going is still raw.

It’s raining today and it feels right. Kinda gloomy and dark. Matches how I feel.  I know she did so many things in these last 5 years. They went to Hawaii twice, traveled and much more. She also did the ‘death decluttering’ getting rid of her kyacks, horse, Johnny, bikes, clothes and made amends with her 2 children.  She really died in a dignified way and conscious right to the end.

Well, I will let myself feel sad and then it’ll be another day.

Our neighbor is dying. She has stage 4 Ovarian cancer and has survived for almost 4 years but now things have taken a turn for the worst. She’s 2 years older than me or B’s age 67.  She was a kindergarten teacher and hadn’t planned to retire but once diagnosed she did. After a rigorous regimen of chemotherapy, she was in a partial remission and the tumors had shrunk. Then she took a year of alternative therapy with juicing, became vegan and gluten-free. She maintained that till just this year. Then she got into a clinical trial at Stanford and it was really working, of course, until it stops working and then you have to leave the trial.  She didn’t want to do any more chemo as the quality of life over quantity was so important.  So she has had this past year chemo free and started to enjoy all foods again even coffee.

Our neighbor was an avid horsewoman and sports enthusiastic. But with this last year, she started the ‘death decluttering’.  She sold her horse, trailer, truck, all horse equipment, and even his shelter. She sold her kayak, canoe, bikes, and so much more.  She has understood the ‘death decluttering’  very well. She doesn’t want to burden her husband or her two adult children. It’s a brave thing she is doing.  She has a large support group( whereas I have no ‘girlfriends’ as such) and they are rallying around her. It’s a wonderful thing.

Death comes to us all one way or another so we must really look to each day as an opportunity to live fully but also, realizing NOW is the time to do the’death decluttering’.

Take some time in your life to get rid of things that are burdensome, so those left behind don’t have to wade thru piles of stuff.

Recently, I gave away some old family books that I had put in a bin. These books were over a hundred years old and belonged to B’s grandmother.  He never knew her and they were just musty old books his mother sent to him one year. B did not have a good relationship with his mother(overall), and she certainly didn’t like me and only met her granddaughter a few times and never met her grandson. One year when my son was about 1, she said she had the choice to go to Iceland or visit with us to see Z and our daughter. Well, she chose Iceland and died never meeting her grandson.  So recently, I was thinking about these connections and books and thought, ‘why am I keeping these books out of some obligation”?  So after taking them to the ASPCA bookstore, I felt a huge relief. It was freeing.

So try it. Start the ‘death decluttering’.

The link is for the new book coming out in January on this” The Gentle art of Swedish Death Cleaning: How to Free Yourself and Your Family from a Lifetime of Clutter”

It’s sometimes hard to put into words when someone with an aggressive multiple myeloma  loses the battle. Arnie really was a beacon for all of us, courageous, informed, and willing to do a lot to get thru to another day , or year.  I am sad, and grieving for his passing. Not sure what else to say, but it’s sure a sad day. ;( 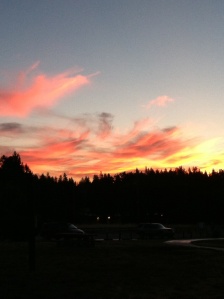 We lost one of our myeloma heroes this week,Judy M. She was an amazing and inspiring person. She tried so many drugs, but she had high risk myeloma and in the end nothing was working.  I enjoyed her blogs and she will be missed. I send thoughts of peace to her family who were there for her the whole time at the end.

It is a reality check when someone you’ve been following for a while dies. Last year we lost a number of myeloma cyber space friends. It is  a tough wake up call. I feel very lucky to be still here and doing well. It’s not always easy but heck, what’s the alternative. So RIP, Judy….

on other notes, B is putting in our new window today. Should be good. And I’m going to start painting  the window trim. Since tomorrow is a dex day , I’m good till around 1 pm then I crash for a few hours and then @ 4 I start to pick back up.

menu for the week is:

Tuesday: spaghetti and meat sauce/ marinara for the vegies

Wednesday: frittata  of some sort