It actually rained here the other night. We woke up to everything watered down. All the yellow pollen washed away. It’s cooler but actually nice. Today our high will be around 60 so okay.

Update on the Instacart order. It was great. I got almost everything I ordered and was really pleased. It is more expensive with a tip but I definitely thought it was worth it. I will probably do at least one more before venturing to Costco.

We did a very early trip into Home Depot since they wouldn’t do the curbside pickup for the gate post. We bought one farm gate for one driveway but needed the post. I don’t plan on keeping the gate close all the time but I want the option especially when we’re not here. Our driveway is weird as it splits and goes straight into where we park and then to the right back to the barn. No one can ever figure out which way to go.  I think we will do the second gate in the fall.

We’re also planning to put up some privacy fencing. The neighbors behind the barn moved up here from the Sacramento area and have a lot of crap we can see. So we plan on putting up around a hundred feet of cedar fencing along that border.  Then we want to do the same for where our elderly neighbor( Leo) lives since when they sell I fear who will move in will be rednecks with 6 kids. So I want a fence along the driveway to block seeing over there.

I’m also thinking of doing a bulk meat order from someplace like Butcher Box. It’s supposed to be small ranchers and grass-fed meat. Has anyone done that?  Usually, I get organic from Costco but thought about doing something different.

I bought a food sealer thing on Amazon that vacuum seals food. I tried a few things yesterday and it looks like it would be great for rice, meat, cheese, etc.  I tried bread and it squished it flat so that didn’t work. I then read the manual and it said to freeze the bread first and then vacuum seal and put back in the freezer. So I’m going to try that today too.

The chickies have quadrupled in size and are now out in the big girl’s pen. They are still separated but soon will mix with them.  We’re going to have lots of eggs by next spring:)

We’ve been watching Ozark on Netflix and it’s a good show. Dark, but good. Sorta like Breaking Bad was. Oh, plus on Hulu the funniest, Stan versus Evil is hilarious. Definitely lots of laughs.

another loaf of sourdough…

this is what it looks like in the proofing basket. 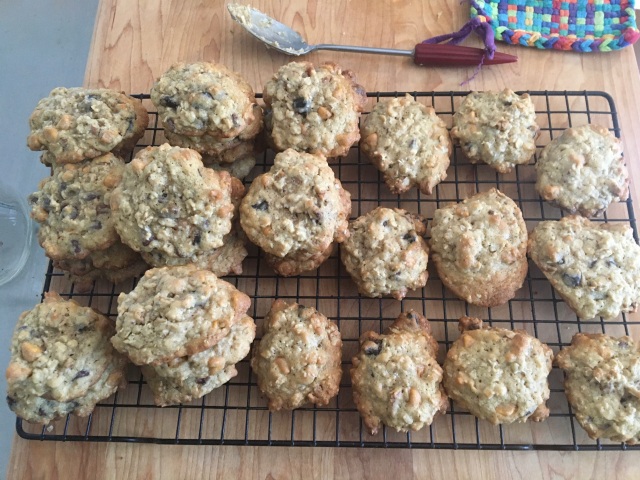