The day sorta got away from me yesterday. 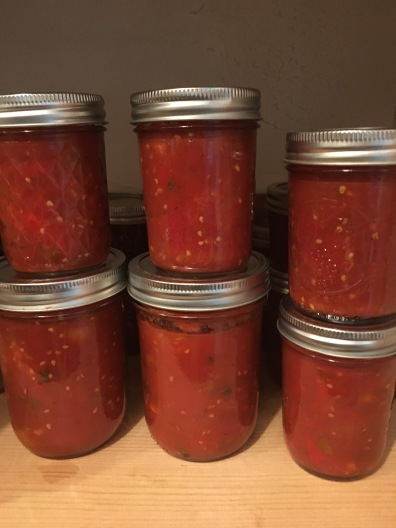 I made 5 small jars of salsa and 2 bigger ones. These were all our own tomatoes so that was a big plus.

I doubt we’ll get enough tomatoes for all the sauce I need for winter but I will get some. Based on last years supply I probably need about 18 freezer bags of sauce. I may try and can some but freezing is easier.

Then I decided to make up the sourdough leaven for a Tartine bread. I have the one loaf rising in the bread basket form and I’ll cook that in an hour or so.

My oncology appointment went well. I told him about the stress fracture and he did say ‘repetitive’ movement. So maybe it was just walking every day. Who knows?  My foot is still bothering off and on. Kinda weird. He suggested a DEXA scan so I will do that sometime this fall.  I did have one around 14 years ago that was normal. That was about a year before I was diagnosed with myeloma.

Then we headed to Costco and spent a small fortune. B bought a small or I guess it’s called ‘dorm ‘ refrigerator to replace the tiny funky one he had. It was a good deal at $130. Now we could get milk and OJ at Costco as there would room to keep them out in the barn.

Today, I’m making 2 zucchini loaves of bread from a Smitten Kitchen recipe. She said to use 2 loaf pans but it looked like it wasn’t very full but we’ll see how they turn out.  I plan on freezing one sliced so we can pull out a slice when we want one in the fall-winter. If the recipe is a good one, I’ll make a few more, maybe to give as gifts.

It’s very very hazy here from the Carr fire. Hopefully, it’ll clear out and the fire will get put out.