My daughter found this picture on one of her CDs and I was honestly like ” WHAAAATTTT”!!

The cats are cute, and the Waldorf stuffs ok but the rest?? What in the world was I thinking or better yet, NOT thinking of?

The cats,, Ollie and Finwe, are just maybe a year old or less so this would be maybe 2005??? I was diagnosed in June 2005, so I know nothing minimalist wasn’t happening then or even 2006 after my Stem Cell Transplant. My recollection is that it was when I relapsed in 2010. It gained speed and momentum by 2012.

I think it was at that point I started feeling closed in and all the clutter was too much. Except for the 2 cats, all that was gotten rid of. Even all the Waldorf play silks. I gave them to some Waldorf family. The desk is gone, and the TV under the silk. I use the wishbone chair as my office chair. It’s a Heywood Wakefield.

Here’s what it looks like today. You can see my Pinecone ware, a few Catherine Holm pieces. Both, of which if I found reasonably priced today, I would buy. 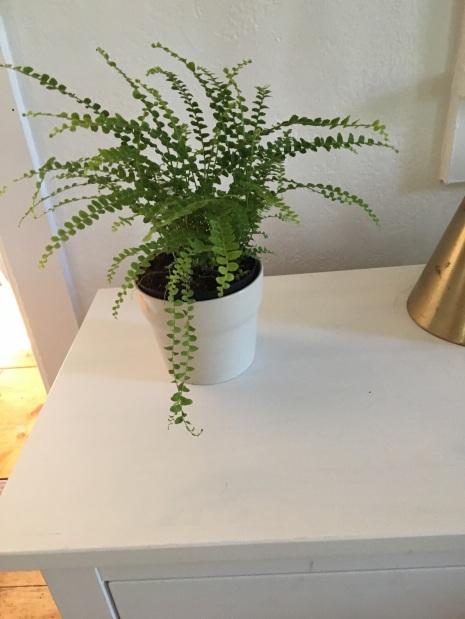 This is one of new ‘friends’. It’s just the sweetest fern. Keeping with a minimalist style I ‘m trying to add plants as the decor.  I just love this little plant. I’m not sure if it’ll be happy there as there is not a lot of indirect light.

So one of my strongest suggestions is to take photos of your spaces. I’m truly amazed how I see it differently if I take a photo.

Another is to really remove tchotchkes.  You really don’t need every shelf filled to the brim with useless crap. What I try to do is keep most shelves only half full. In our one teak bookcase that holds our Easton press, there are 3 shelves that are full, no spaces. But as a rule, I try and actually keep one empty shelf.

Another thing that helped so much was getting over ” well, I paid a lot for that Waldorf silk or that Waldorf doll”. It’s past its usefulness. LET IT GO!!  I gave away lots of quite valuable things to friends and thrift shops. Sterling silver, vintage cloths, vintage toys, and so much that I just didn’t have space for and I didn’t want stuffed in bins.  I can’t even remember the number of van loads I took to thrift stores. But it is and was so freeing.

Your space is meant to be calm and healing. With excess furniture, things, dishes ( my weakness), you just can’t find that balance.

I recently redid where I was keeping DVDs that we still want but don’t watch but once a year. The original Star Trek Series, Next Generation, Narnia, Forsythe Saga, and more.  I put the Star Trek in a small bin and put in the laundry room on a shelf. Then the others I removed from 2 drawers and repacked into 2 cute little crates I found at the Goodwill. They’re in a cabinet in the Heywood.

Right now one of my projects is working on photos. I’ve thrown away tons of repeats and just fuzzy or boring ones. But we still have a lot of our younger years that I’d like to get organized. That will take a while. I have scanned some but that really takes time.

One more thing, just start somewhere, then just keep going. It will and does get easier. Plus things are easier to clean and tidying up goes so much quicker.

So my daughter checked the date and it was Nov/Dec 2013.

This was the worst time in my life( up to that point) as this was when I had the compression fracture which was caused by the myeloma. It was misdiagnosed and then discovered 1 1/2 years later. So that happened around Thanksgiving of 2003. The reason at least superficially was that I had been lifting boxes. You see, I had just been to my first big estate sale and bought an almost complete collection of Life magazines. It was 40 boxes weighing at least 50 lbs a piece.  So I lugged them to my van , then to the barn, then to the studio. It was the next day was when I felt a pop. But it wasn’t till the next morning when I literally couldn’t get up. Why do you ask did I not go to the Er. That’s a good question but answerable. We never hardly ever went to doctors. We used herbs, natural remedies, blah, blah blah. So, when I did go to the NP and she said it was just a sprain, I should have been more proactive.  Hindsight is 20/20.

So that’s the back story….

5 thoughts on “The journey of minimalism!”