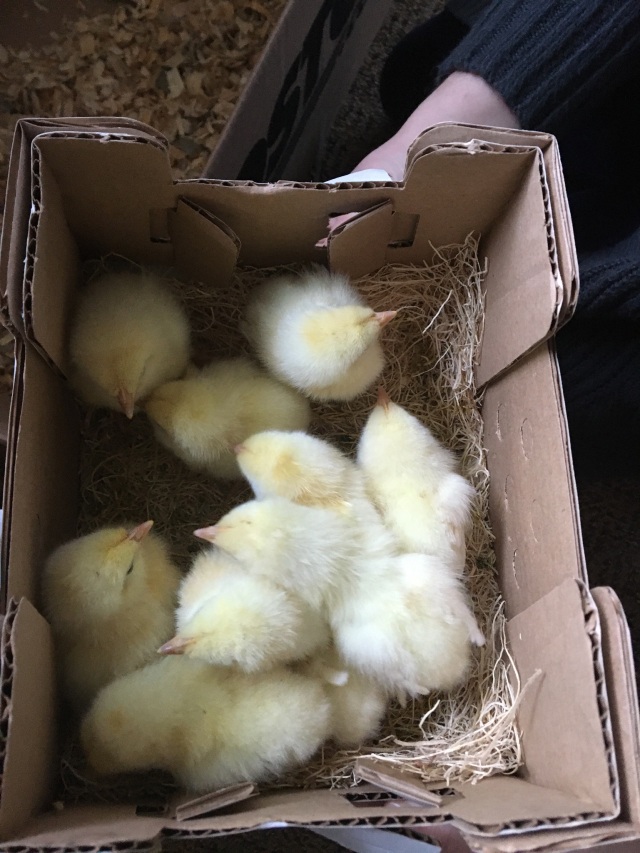 Well another day and really what day is it???

Things are fine here although I have felt a little stir crazy with the massive rain we had that kept everyone inside. Now it’s going to be nice again and even approaching 70 degrees.

The chickies are growing overnight, which is what chicks do.  For now, they are in a big Costco box( good timing) with a red light for warmth. They will stay inside for a few more weeks and then we will move them to the sunporch. will need the sun lamp for quite a while longer. They really don’t go out with the big girls for quite a while.

The sourdough bread came out tasty but I should have had a bit more of a water ratio. Next time will weigh things out which really is the best way to do a proper sourdough.

We’re out of fresh veggies, salad, milk, etc. So tomorrow I will go to the market early to see what I can get. I’d rather not do Safeway as there are more people. I have one more Costco order showing up but that more prepper pantry stuff. Plus I did put on paper plates which we haven’t used in ages but it will help alleviate the very loaded dishwasher..every. single. night!

Last night I made a manicotti and it was quite good.  Tonight I have tortillas for fajitas ( I think that’s what I’ll do). Plus I have sour cream and avocado.( I have one left).

B has his labs this morning and then a video appt with his doctor. That should be interesting. I had my labs yesterday at Quest and they were all very conscientious.  I wore my mask and gloves. Not sure when I’ll get my results as theoretically my doctor was supposed to be in Africa on safari. I doubt that is happening.

Well somehow, the whole second half of this post disappeared so I will try again later.

I was saying before half the post disappeared… that my blog is 8 years old. I started in 2012. At that time I was 2 years into being on Revlimid as I had relapsed from my SCT in 2010. I did pretty well on Revlimid. It was the Dex that usually did me in. And then after about year 3, I started having serious IBS from the Revlimid.  But what I was saying was I started writing about myeloma and life.  Then I became refractory to Revlimid in 2015. So it was on to the next drug, which amazing worked wonders.

At that point in 2012, I began seriously minimalizing all our stuff. I got rid of at least 1/2 of what we had.  Still, even now, I think there’s more that could go or perhaps be changed up for something fitting to where we are now.  I was already doing Flylady as that is what really changed things for me. I could do 10 minutes a day.  It really was a game-changer. Even though now I don’t do the daily things for the zones as she does, I still do each zone weekly and I write what I need to do in that area.

about doing an online alcohol order and that I was considering doing it.  She is a really good writer and has a great sense of humor. As a fellow introvert, It’s fun to read her stuff. Go check it out.

Oh yeah, I was on a rant about the news and our ignoramus President. Such a dumb, self-centered, narcissistic leader. It’s his fault at not taking the coronavirus seriously back when he was informed in January.   The Washington Post has a very informative article on the timeline and it is astounding his lack of caring when medical experts were telling him what was on the horizon. His lies and spins on this is really appalling. Plus the whole thing with relieving the captain of the ship and then firing the inspector general who forwarded the whistleblower’s report is such an obvious misuse of power that there are no words really.  It is a disgrace and I know history will tell the tale of the worst president ever. A reality TV star and a lousy one at that.

I think that was most of it that got deleted or lost in space.